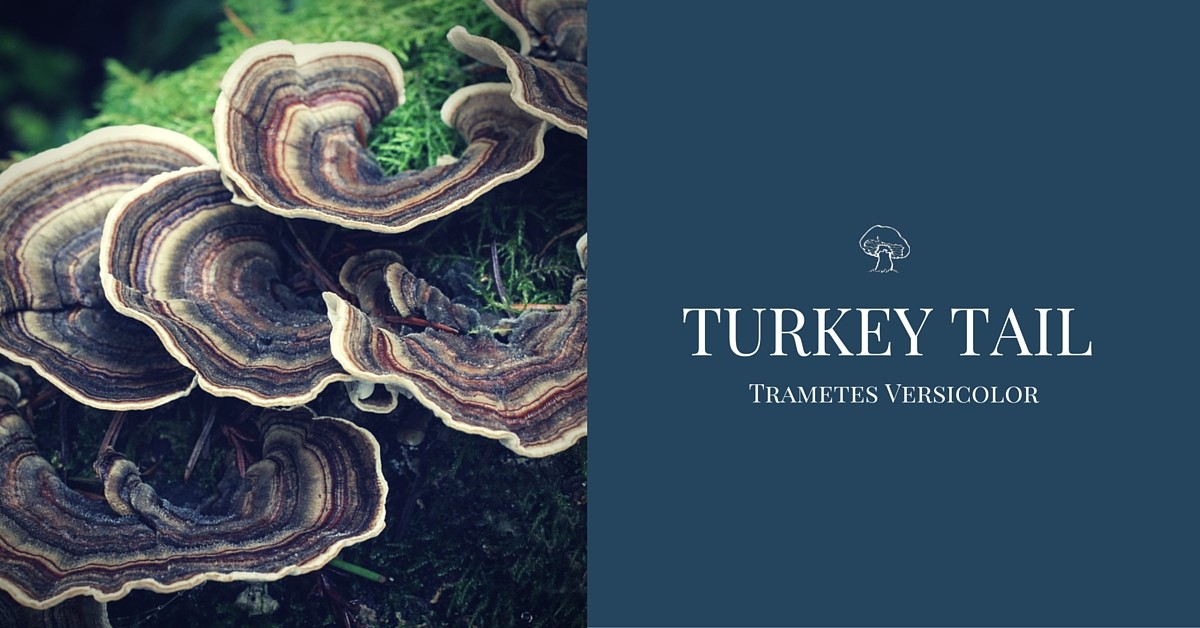 Turkey tail mushroom (Trametes Versicolor) is a common mushroom abundant in North America, but it also exists in other parts of the world. Its cap colors vary from gray, brown, cream, green, and reddish brown, resembling actual turkey tail colors. Being a polypore mushroom, it grows on the surface of trunks and stumps, attaching themselves like roofed brackets with their pore bearing organs or the tubes on their underside. The cap surface has a predominantly velvety texture, but some have alternating smooth and velvety textures. It has a lifespan of 1 year.

Turkey tail is one of the easily-recognizable mushrooms in the world. It grows in overlapping clusters on dead and decomposing hardwood stumps and logs. Some grow on conifers, too.  Another name for this mushroom is Coriolus versicolor. 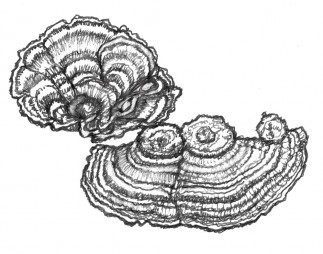 Trametes versicolor is so named because of the varying colors present on its cap. The caps are zonate, which means the colors appear in contrasting zones arranged in a concentric pattern. The colors range in the reddish brown, cinnamon and brown hues. Sometimes, the colors ay include orange green and blue.

The cap’s surface is velvety or fuzzy. The texture of the zones vary too, in alternating fuzzy and smooth feel.

The cap can grow to about 10 centimeters across. It is only a few millimeters thick. When fresh, the caps are flexible. The shape can be kidney-shaped, bracket-shaped, circular or semi-circular. The caps are often fused together.

The flesh is white. It is leathery and very tough. There is no distinctive taste or odor of the flesh of the turkey tail mushroom. The flavors can be bland to mildly sweet. When freshly harvested, the mushroom is slightly cold.

Where can turkey tail mushroom be found?

The mushroom has a wide habitat. This is among the commonly growing mushrooms in the world. It grows widely in North America and in hardwoods growing in the 3000-m altitudes. It is also distributed throughout most of the regions in China.

Turkey tail mushroom is traditionally used for treatment and healing of various ailments concerning the lungs, spleen and liver and is beneficial for people with compromised immune systems. It is widely used for disease patients to prevent rebound after their radiotherapy. In Japan, the extracted protein-bound polysaccharides and polysaccharopeptide are marketed as a disease drug. It is also effective against E.coli, herpes, and HIV. 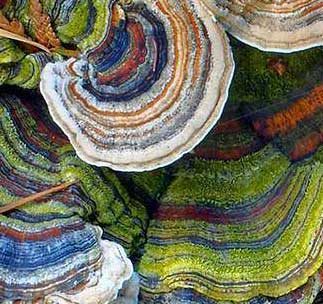 Turkey tail mushroom increases the activity of Natural Killer (NK) cells and various T-cells (predominantly CD+8 T-cell) in order for the body to fight tumor cells and viruses effectively. Ever since the Ming Dynasty, this mushroom has been brewed and drank as a tea to ensure overall health. Boiling kills the contaminants on the mushroom and releases the active enzymes. With modern extraction methods, compounds that are more beneficial are extracted from turkey tail mushrooms. Unlike pharmaceutical drugs, turkey tail mushroom cannot be patented, so big pharmaceutical companies stay away from doing expensive research and tests on it.

This effect can help in better regulation of inflammatory processes in the body. It can inhibit chronic inflammation.

The activation of the T helper cells also aids in a more effective fight against viral infections. This action can help protect the body against viral invasion such as in hepatitis and herpes.

This benefit is in line with the previously discussed action of turkey tail in the body. When disease develops, rogue cells develop. These rogue cells secrete cytokines. These are chemical messengers that send a “stop” signal to the immune system. The release of cytokines will cause the other immune cells to stop functioning.

The rogue cells send cytokines that give a false signal for the immune cells to stop working. This effect will promote the proliferation of disease cells. There will be no immune cells that will kill and hinder the development and multiplication of the disease cells.

By taking tail, the T helper cells are reactivated. This reactivation will set the immune processes in motion once again. Immune cells will then be able to seek, destroy and eliminate the disease cells.

These actions also aid in the reduction of tumor growth. These can also inhibit the development of new tumors.

Research was able to demonstrate this effect. However, this is not an indication that turkey tail is finally the magic bullet to end disease. More research is still needed. What is certain is that turkey tail can help improve the quality and prognosis of disease patients.

A clinical trial has just been published with promising evidence of successful treatment of breast disease with turkey tail mushrooms. More studies and trials are also being conducted on its use for the treatment of prostate disease.

Again, this is an added benefit of the immune-boosting effect of turkey tail mushroom. Because the body is better protected against the negative effects of infections and poor immune response, the tissues can function better. Energy is better circulated and utilized.

The active compounds found in turkey tail mushroom include the following:

Technically they’re edible but it’s not recommended to consume wild turkey tail mushrooms because they have the tendency to accumulate heavy metals, mostly cadmium. Fungi survive radioactivity and some, like turkey tail mushroom, absorb toxic chemicals.

And while I say they’re technically edible, based on their taste, you won’t soon see them served in a gourmet French restaurant.

If you notice any side effects while taking it, please report back here and leave a comment below.

Should You Consider Taking It?

Turkey tail mushroom tea or extract powder, if sourced from a skilled grower, has the potential to bolster anyone’s immune system. With the increasingly toxic environment where disease seems to be a norm, it is crucial to complement your diet with potent immune boosting foods, not just multivitamins. I prefer taking it in convenient capsule form to avoid the horrid taste.